In the year 2001, JUAAB started Elementary Japanese Language classes at its rented space in Panthapath with the initiative of a Founder Member Prof. Dr. AKM Moazzem Hussain (who was trained in Japanese Language Teaching by the Japan Foundation in Tokyo in 1975) and the help of a young Japanese student of Dhaka University Mr. Hiroki Watanabe. Later on two Japanese Language Teachers, Mr. Kojima and Mrs. Eiko Hussain Kambe came forward to help us. However, after a few years, the Japanese classes were discontinued when the JUAAB Office was shifted to the Dhanmondi area in a residential building which was not a convenient place for school activities.

In the year 2010, we got a new young Japanese Language Teacher Mrs. Natsuko Sato Chakraborty to join us and she became our main teacher (and Principal of the School later on) after a little more than one year when Mrs. Tamie Rahman left us for a better opportunity. Around that time, Bangladesh was included by the Japan Foundation as a new centre for the Japanese Language Proficiency Test (JLPT) and, through the recommendation of the Embassy of Japan. JUAAB was given the responsibility for conducting JLPT in this country. Initially JLPT was conducted in December only, but later on it started to be conducted in July and 2 / 6 December every year and JUAAB has been carrying out this responsibility successfully till today. While conducting the JLPT countrywide, JUAAB’s Japanese Language School started to teach N5 and gradually up to N4 and N3 levels of JLPT courses. The JLPT success rate of JUAAB’s school has been higher than those of other schools in Bangladesh and JUAAB is proud of this achievement which has been possible due to the dedicated efforts of its Japanese Language Teachers (Mrs. Natsuko Sato, Dr. Farhana Rahman and Mrs. Fazilatun Nesa). The management of the Japanese Language School of JUAAB has been looked after since 2001 by the Course Coordination Prof. Dr. AKM Moazzem Hussain along with the JUAAB’s Executive Committee (presently headed by its President Prof. Dr. M.A.M. Yahia Khandoker) and the School’s Principal Mrs. Natsuko Sato. Since last one year, the School is nicely located on the 2nd floor of a newly purchased excellent commercial space at Indira Road just in front of the under-construction Metro Rail Farmgate Station which is a very convenient place to commute from all over Dhaka.

JUAAB Japanese Language School mostly offered N-5 level language course for 6 months and 3 months known as long and short course. Recently Japanese government has decided to hire employees from Bangladesh but the condition is that they have to have at least N-3 level language knowledge. So recently we are giving more emphasis on higher level language teaching so that Bangladeshi people could learn advance courses and could avail the opportunity to go to Japan for employment. Keeping in mind all this thing our language subcommittee has decided that our language school should teach the following level of language courses:

Reason for Opening the course:

The regular Japanese Language course of JUAAB are now suspended due to the COVID-19 Pandemic and we do not know when those courses can be resumed. On the other hand, many Bangladeshi students must be eager to learn the Japanese Language. However, the lesson days and timings of JUAAB were perhaps not suitable for many of the desiring students and, therefore, they did not take admission in the regular courses. Therefore, if the lesson is given on-line, the above problem can be solved and the desiring students can learn the lessons at home and at any time suitable to them.

How the classes will be run 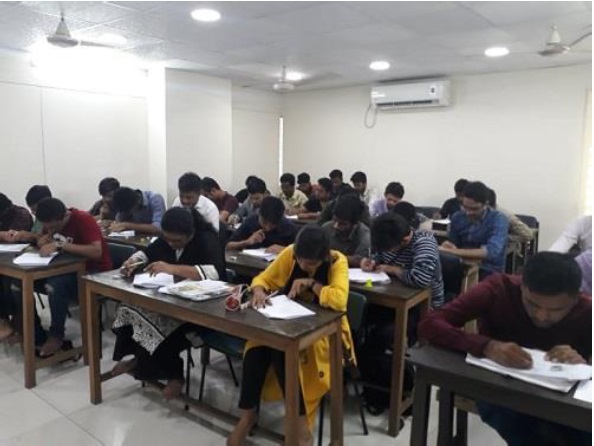 Languages open doors to the new world. The Japanese Language is an important language in today’s world. At present, more and more people seem to be learning Japanese in order to know more about Japan which is the second biggest economic power in the world.

In Bangladesh, more and more students are now looking for Japanese Universities for their higher studies and research. The economic and trade ties between Bangladesh and Japan are also getting stronger day by day resulting into more interactions between the businessmen of these two countries. The exchange of cultural programs between our two countries is also increasing gradually.

In the light of the above developments, JUAAB has been offering Japanese Language Courses of various durations with the help of native teachers from Japan. At present, the courses are:

In all of the above course, the students have the opportunity to know about the life and culture in Japan. The courses are also supported by a rich collection of Japanese text books and reference books, video films and other audio-visual teaching aids.

In April 2009, the Japan Foundation has recognized our JUAAB Japanese Language School and has given it the membership of “Sakura Network” for a period of five years. This has definitely enhanced the prestige of improve the quality of our courses.

JUAAB is an association formed in September 2000, by Bangladeshi nationals who have earned academic degrees from Japanese institutions. The association, aims to promote exchange of academic, scientific, technological and cultural activities between Bangladesh and Japan.

Anybody having HSC or equivalent qualification is eligible for admission to any course of JUAAB Japanese Language School.

The class size is always limited to 30 students (on first-come-first-serve basis) in order to get a high level of teacher-student interaction.

For all courses, the classes are held 3 days a week, normally in the late afternoon/evening/morning for two hours.

Pay total amount at the time of admission at any Bank mentioned below:

On completion of each course, Certificates are awarded to the successful participants by JUAAB.

Being requested by a company/industry, JUAAB has the system of dispatching Japanese Language Teacher(s) to conduct in-house courses for the employees on mutually agreed terms & conditions.

-Students have the access to library facilities, internet browsing.

-The students willing to go to Japan for higher studies can get counseling from the Embassy’s Education adviser sitting at the JUAAB Office.

-The students can also attend the “Education Seminars” organized from time to time jointly by JUAAB and the Embassy of Japan in Bangladesh.

-The students can enjoy the most congenial air-conditioned environment.